With the 2014 version of the NBA’s signature event fast approaching, I thought I’d take the opportunity to reminisce a little bit about my favourite NBA All-Star Game of all time – the classic that was played out in 2001.

The 2001 edition was the league’s 50th All-Star Game and had everything you could ever want from the showcase, including a one-point final margin (something that has only ever happened three times in NBA All-Star history).

Let’s start, just as the All-Star Game festivities do, with the national anthem.  Jessica Simpson’s rendition of the Star Spangled Banner prior to the 2001 All-Star Game may not have been the GOAT (that honour goes to Marvin Gaye’s 1983 effort by a country mile), but it was pretty darn good.  You may not remember (or want to remember) but pre-Newlyweds Jessica Simpson was actually a pretty legit singer.  Last year’s rendition from the very cool John Legend was better – as was Josh Groban’s in 2011 – but Simpson’s version was good enough to register in Fox Sports’ recent Top 10 list of NBA All-Star National Anthem Performances and it set the scene perfectly for an awesome 2001 ball game.

Next – the uniforms. After the horrendous uniform designs of 1995 and 1996, the league entered into a period from 1997-2002 that saw All-Star players wearing the uniforms of their own teams.  Presumably due to the Lakers and their gold home strip, the East teams wore their home whites for each of those games while the West wore their away uniforms.  Obviously there is a lot of personal taste that comes into uniform appreciation and my personal taste is that the players looked f-ing cool repping their actual teams while running around in the All-Star game.  Check out the look of the 2001 East crew below and tell me I’m wrong.  IF you can, try to ignore for the time being that Anthony Mason and Antonio Davis are in the picture impersonating All-Stars, and focus instead on how awesome the group looks which each player decked out in his own team’s gear. 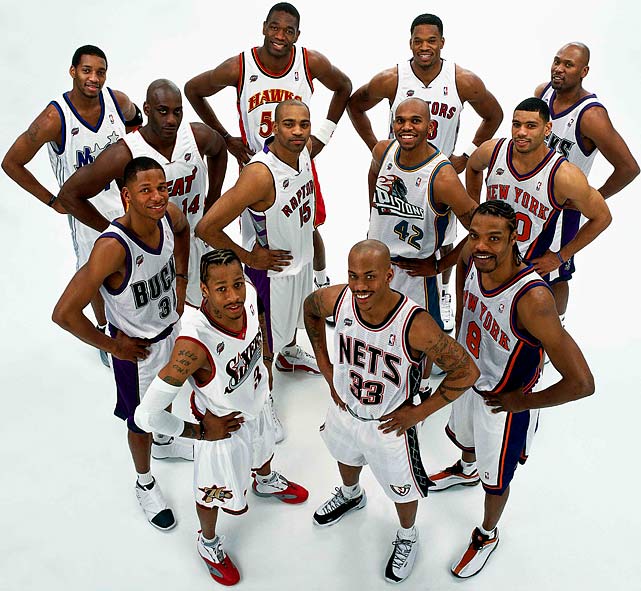 Having just passed your eyes over the Eastern Conference squad, this might be the right time to explore how shockingly bad the talent level on this East team really was.  With Grant Hill and Alonzo Mourning missing through injury, the East was left with a severely depleted lineup.  Sure… The Answer, TMac, Vince, Dikembe and Jesus Shuttlesworth were all legit, career All-Stars but six of the East’s twelve guys never made more than two All-Star appearances in their careers.  East players to never play more than two All-Star Games: Davis and Mason (obviously) as well as Allan Houston, Glenn ‘Big Dog’ Robinson, Jerry Stackhouse and Stephon Marbury.

On paper, this squad was severely outsized and outmatched against the powerful Western Conference team.  Four of the West’s starting group as voted by the fans (Kidd, Duncan, Webber and Shaq) were All-NBA 1st Team selections that year.  The other starter (Kobe) as well as Shaq’s injury replacement (KG) were both All-NBA 2nd Teamers. Check out the career All-Star numbers from some of the West squad: Kidd (10), Kobe (16), Duncan (14), Garnett (15), Mailman (14), Payton (9), Robinson (10).

The total number of career All-Star appearances from this West team (not including Shaq)? 101.  The East? 58.

They were smaller, less experienced and less talented overall.  And yet, somehow… they won.  Somehow, after falling behind 13-0 to begin the game and after trailing by 21 points with only 9 minutes remaining in the 4th, this group of mainly 1st and 2nd time All-Stars managed to pull off a miraculous and entertaining 1-point victory over the superstars from the West.

How did they do it?  The Answer to that question lies in the first two words of this sentence (sorry – I couldn’t help myself).

The little Sixer with the big heart scored 15 of his MVP-winning 25 points in the final 9 minutes to rally his Eastern Conference teammates to a huge comeback win.  He was the out-and-out heart and soul of the team but he was well-supported by the upstart Stephon Marbury, who caught fire from deep in the final couple of minutes, as well as Dikembe Mutombo who pulled down 22 rebounds against the West’s powerful frontline.  In fact, Dikembe Mutombo Mpolondo Mukamba Jean-Jacques Wamutombo’s 19 defensive rebounds still stands as an NBA All-Star game record to this day.

But back to the real story: Iverson was by far the best part of this game.  He was, in fact, the best part of that entire NBA season.  The 2000/01 season was the year A.I. carried the Sixers to The Finals and it was the year of his league MVP.  He was the home-town boy at the All-Star Game as the weekend’s festivities were held in Washington’s MCI Center (now known as the Verizon Center) which is just a few hours drive from Hampton, Virginia where Iverson grew up and played his High School ball. It’s also just up the road from where he played his college ball at Georgetown University.

Iverson, to me, brought the perfect balance of entertainment and competitiveness to the 2001 All-Star Game.  What makes these athletes special is their amazing talents and creativity but also their competiveness – and this was especially true when it came to Iverson.  At 6’0” (183cm) The Answer was (and still is) the shortest first overall pick in the history of the NBA Draft and the little man had to scratch and claw his way to greatness in a league normally dominated by taller players.  At the 5:10 mark of the 1st half clip below, Iverson drops the comment (while being interviewed at quarter time) that “I’m trying to get a win, man.”  I love it!  Nothing bores me more than when players goof around during All-Star games.  Watching the best players battle it out for Conference pride in 2001 was Fun with a capital F and Iverson was the one who set the tone.

Here are a few more of my favourite storylines and tidbits from my favourite NBA All-Star Game, including a few things to keep your eyes on during the highlights of the first half:

And in the 2nd half:

I like to think that I bring the all-important little man’s perspective to the Downtown crew. The rim may be 10-feet high folks but the court, itself, is at ground level. My one season playing ball on the national scene was back in 2001/02, when I played the vital role of 4th-string PG as a member of the Victoria Titans. Go back and watch the tapes, I’m confident that only Patty Mills outranks me worldwide as an end-of-the-bench towel-waver. This experience, however, gives me the kind of an insight into pro hoops that can only be gained by spending time ‘behind the curtain’. These days I spend most of my spare time squeezing every last cent out of my League Pass subscription. And when I’m not playing, watching, writing about or podcasting about basketball, you’ll find me soundly outplaying all-comers at the fantasy version of the game. Safe to say that if I had a tatoo it would say ‘mum’. But if I had two tatoos, the second one would definitely be of a basketball. Follow me on twitter: @liam_santa