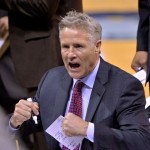 We’ve always known the Great Barrier Reef was one of Australia’s best assets, but did anyone foresee it further developing basketball down under?   Brett Brown grew up firing shots at a hoop hanging off the family garage. His native New England area boasted four full seasons, so when the snow had melted to outdoor ball temperatures, a lush lawn… END_OF_DOCUMENT_TOKEN_TO_BE_REPLACED Talking to almost anyone in the NBL, Sydney Kings point guard, Jason Cadee, is known for his court vision. He snakes around ball screens, seeing his big man rolling, his strong side wing, and the weak side shooter ready to let it rain. This ability is one of the reasons he’s earned a starting job in 2015. But despite the… END_OF_DOCUMENT_TOKEN_TO_BE_REPLACED Aussie hoops fans may have marked December 19 last season as Cam Gliddon’s best throw down to date. The Cairns shooting guard crossed left to right, hesitated, then split four Adelaide 36ers to climb the ladder and crown 216-centimetre Luke Schenscher. But the biggest dunk of the 26-year-old’s career came seven years ago when Gliddon caught a lob in Orange… END_OF_DOCUMENT_TOKEN_TO_BE_REPLACED