There is something about Oklahoma City rookie and New Zealand native Steven Adams that annoys people.  In his very short time playing NBA basketball to date, four players have been ejected from NBA games for retaliating to some kind of physical contact they encountered from Adams.

The most recent occurrence of this was Larry Sanders, who was tossed on January 11 after elbowing Adams in the face:

In mid-December, Jordan Hamilton threw a punch at the kiwi which sent the Denver Nugget SG to the locker room for an early shower and Nate Robinson and Vince Carter have both met the same fate for the same type of thing.

Hilariously, Steven Adams’ demeanour when these incidents have occurred has never wavered.  He simply looks unperturbed.  In fact, when Carter hit him flush in the jaw with a deliberate and vicious elbow, Adams didn’t even flinch – he just stayed focused on the offensive rebound opportunity that was in front of him.  It was almost as though he didn’t even feel it, or at least didn’t care whether or not the refs were going to call it.

Recently a local Oklahoma City reporter asked Adams how he was able to take such a beating.  His response? “Have you seen my sister?  Look her up, bro.”

Steven Adams’ sister, Valerie Adams, is one of the greatest women’s shot putters the world has ever seen. 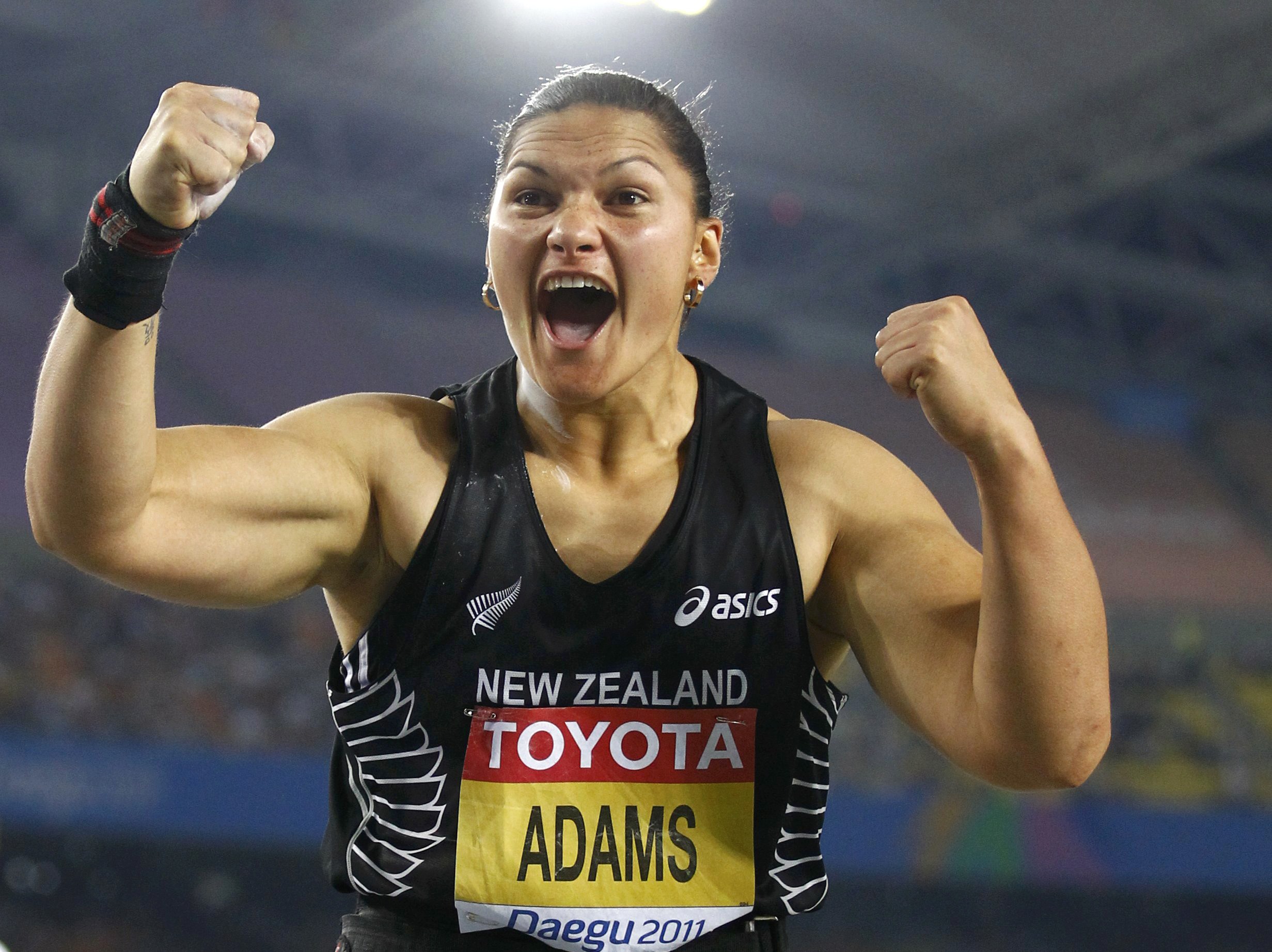 She stands at 193cm (6’4”), weighs close to 120kg and has won gold at both the 2008 and 2012 Olympic Games. She is the first woman in history to win four consecutive individual titles at the world track and field championships, regardless of event.

Valerie is one of Steven Adams’ 17 siblings.  That’s right…. 17 brothers and sisters.  Steven’s father, Sid Adams, was an Englishman who settled in New Zealand after serving in the Royal Navy and Steven, whose mother is Tongan, is the youngest of Sid’s 18 children with five different women.

Sid was an important influence in Steven’s life as a youngster and when he passed away in 2006, the then 13-year-old Adams went off the rails.

“When I lost my dad, that was a big hit for me,” Adams told the Pittsburgh Post-Gazette while he was playing for the University of Pittsburgh last year. “I didn’t have that parental guidance, and I kind of took advantage of it because I was a stupid idiot. I decided not to go to school a couple of times, go when I felt like it. I always lied to my brothers and sisters. They’d ask: ‘Are you going to school?’ I’d say ‘yeah.’ They eventually found out.”

It was at that point that Steven’s older brother Warren, himself a former professional baller in the NZNBL, took Steven under his wing and invited him to relocate from Rotorua and live with him in Wellington.  Warren helped his little brother to gain entry into a good school as well as a top-notch basketball academy, run by former Washington State Cougar Kenny McFadden.

Steven’s brother Warren also served as the connection that would eventually see the big man play Division 1 college ball in the States.  Jamie Dixon, the coach at the University of Pittsburgh, had played against Warren during a stint competing in the NZBL and it would be this link that would lead Dixon to recruit the younger Adams to join the Panthers prior to the 2012/13 season.

Adams proved the local doubters wrong when he knuckled down to his schoolwork and received the grades that would allow him to take up Dixon’s scholarship offer.  One year at Pitt and the time was right last year for Adams to declare for the NBA Draft.

Thus far, Adams’ rookie campaign has been a big success.

Impressively, Adams has played minutes in all 46 of the Thunder’s games so far this season.  Whilst he averages only 15 minutes per game, Thunder coach Scott Brooks tends to play Adams more (not less!) against the stronger F/C combinations around the league.  Adams has played more than 20 minutes in seven games this year with those minutes coming against Minnesota (KLove & Pekovic), Detroit (Monroe & Drummond), twice against the Clippers (Griffin & Jordan), Utah (Favors & Kanter), Chicago (Boozer, Gibson & Noah) and Memphis (ZBo & Gasol).

The 31 minutes he played against Detroit saw Adams produce a tasty line of 17 points, 10 rebounds, 3 assists and 3 blocks in a narrow win.

“He’s very active,” Brooks has said about Adams. “He clogs the paint defensively and he rebounds the basketball. Those are the things we like about him.”

Former NBA GM and current TNT commentator Steve Kerr has been so impressed with the level of improvement already displayed by Adams that he thinks the big kiwi is headed for the starting lineup. “I love this kid.  He’s still learning but he moves really well.  I think it’s only a matter of time before he’s the starter here in place of Perkins,” Kerr stated during the OKC/Houston game this month.

For the time being, however, Adams is doing just fine coming off the bench.  Coach Brooks runs a very predictable and regular rotation when it comes to his big guys.  Each game Adams checks into the game late in the 1st quarter, does his thing (sets screens, blocks out, throws elbows and grabs rebounds), and then takes a seat again midway through the 2nd.  Most games he will see the same action from late in the 3rd to early/mid 4th.

Adams has spoken ad nauseam throughout his rookie year about adjusting to the speed of the NBA game and to all that is required of him while he’s on the court.  He says that the action is slowing down for him more and more with each passing game.

One place he is very comfortable is in transition as he runs the middle lane from basket to basket with good speed.  If his teammate grabs the defensive rebound, Adams is off to the races – often beating the opposing center down court to collect an easy basket.

He has also become more aware of when to stop his run short in order to slap on an early ball-screen for one of the Thunder’s perimeter ball-handlers.  All that being said, for the most part Adams is still pretty uncomfortable in the half-court offense.  He looks almost robotic during most of the Thunder’s half-court sets as he awkwardly attempts to dribble-hand-off or tries to remember who he should be screening for next.  Luckily, Adams’ Thunder teammates are vocal with him on the floor; constantly talking and pointing (sometimes even pushing) to help him get to the right spots.

Probably the most helpful teammate thus far has been Nick Collison.  The 2013/14 season represents Collison’s 10th year with the franchise and he has carved out a vital role off-the-bench with the team.  Adams and Collison share most of their minutes together on the interior for the Thunder and Collison can usually be seen talking to Adams during each break in play while they’re out there; reviewing the previous possession and/or preparing for the next one.  And when it comes to off-ball spacing, there is probably nobody better in the entire league to learn from than Nick Collison.  He has played in the Thunder system with Durant and Westbrook for a long time and has become the master at getting deep along the baseline and timing his step towards the basket to absolute perfection – something Adams has shown improvement with already.

Adams is already an excellent defender, which is the main reason Brooks has felt comfortable playing him right from the get-go.  He is physical with his direct opponent, rarely giving up deep post position in the paint.  He moves his feet very well for a big man, something that helps him to be active and effective on pick-and-roll coverage. And, importantly, he has great length and timing around the rim – Adams ranks inside the top 20 in the NBA for blocks per 48 minutes.

Where Adams is at his best, however, is attacking the O glass.  Out of players who have started less than 10 games for their team, the big kiwi ranks 2nd in the entire league for offensive rebounds.  Only Taj Gibson, who has started 4 games for the Bulls this season, has grabbed more.

Adams’ massive 7’0” frame certainly helps him cause havoc on the O boards, but there is much more to it than just that.  He possesses a few clever tricks of the trade that he employs when his teammates shoot the ball.  If he has been blocked out effectively, Adams will usually use his massive strength to drive his opponent under the basket, giving him excellent position next to the rim.  This manoeuvre very rarely results in a loose-ball foul being called on Adams as the former junior rugby player is adept at bending his knees and driving his opponents from the hip rather than simply pushing into their backs.

His favourite trick, however, is the arm grab.  As soon as the shot goes up Adams will attempt to (very quickly) grab his opponent’s arm and forcefully swing it backwards.  If he gets a good grip on it, his opponent will be sent off balance momentarily and will, in the process, miss the opportunity to lay a body on Adams to prevent the offensive board.  This is a trick that Adams has absolutely perfected and one that visibly frustrated Dwight Howard and Andrew Bogut all within just the past fortnight.

So far so good for the big New Zealander.  But will all the success go to his head?  What about the intense pressure of the playoffs?  How will he handle that?

“Nothing fazes him,” Coach Scott Brooks told Thunder beat writer Anthony Slater recently. “All he cares about is eating a lot of food and playing basketball.”

Well, we’ve seen him getting it done on the court and a quick check of Adams’ twitter history suggests that Brooks is right on the money regarding the food as well…..

“Food is amazing,” Adams told Thunder writer Darnell Mayberry during the preseason. “I love food. It’s good. It’s from my family, I guess. My family is quite big and we all eat a ton so I think that’s where it came from.”

Steven Adams loves his food, he loves his family, he loves New Zealand and he loves playing hard for the Oklahoma City Thunder.  He’s setting himself up for a long career in the NBA. And you know what that means….. a lot of offensive rebounds and a lot of early showers for frustrated opponents.