Ryan Egan, better known by his stage name Ry, is a Melbourne emcee and basketball junkie who recently released the music video to his new single “Ordinary Record.” Without disclosing too much of the video’s narrative, it features NBL royalty, a Gosling-level jacket and a local court that is quite literally near and dear to our hearts. Keep an eye out for more releases from Ry via:… END_OF_DOCUMENT_TOKEN_TO_BE_REPLACED The evening’s basketball once again belonged to the otherworldly Golden State Warriors, who defeated the Durant, Westbrook and Associates for the third time this season. The W at Oracle has them tied with the Bulls for the longest home winning streak in NBA history, which simply means we’ll be hearing a great deal about the ramifications of a victory in… END_OF_DOCUMENT_TOKEN_TO_BE_REPLACED Last night, 39 year-old Vince Carter threw down a reverse alley-oop against the Sacramento Kings. 39 years-old. That’s twice the old of Devin Booker.  To illustrate just how long these backdoor shenanigans have been going on for, here is Vince doing exactly the same thing to the Kings fifteen years ago. He even pointed to the heavens. If you want more of Vince catching… END_OF_DOCUMENT_TOKEN_TO_BE_REPLACED The Philadelphia 76ers of the early 80s made two unsuccessful trips to the NBA Finals (’80 and ’82) before realising ultimate glory in 1983. During their ’82 run, they defeated the Boston Celtics in the Eastern Conference Finals, taking Game 7 on the road against the reigning champions to book a meeting with the Lakers. During that seventh game, photographer Tony Tomsic snapped this image of Julius Erving rising above Larry Bird and Kevin McHale for what… END_OF_DOCUMENT_TOKEN_TO_BE_REPLACED Things happened:#hardballhttps://t.co/VSvXMM7hVX — #TheLockerRoom (@DT_LockerRoom) February 26, 2016 Recognising the inevitably of a verbal argument turning into physical violence underpins the case for gun control.  When words aren’t enough, so says the evolutionary text, one or both parties may choose to seek victory by harming the other. A gun, a thing designed for harming others, becomes an option. The easier… END_OF_DOCUMENT_TOKEN_TO_BE_REPLACED Check out some of the highlights from Darryl McDonald’s first season in the NBL with the North Melbourne Giants (1994). 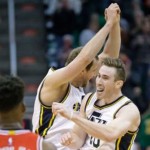 Boomer Joe Ingles was instrumental in the Utah Jazz’s big win over the Chicago Bulls. With less than a minute remaining in OT, Ingles threaded a gorgeous ball to a slashing Gordon Hayward to punctuate a 7-0 run and put the game beyond the reach of the Bulls. It was wasn’t his only great assist of the night, with Rudy… END_OF_DOCUMENT_TOKEN_TO_BE_REPLACED

Last week, Kanye West previewed the track “Real Friends” in the lead up to the February release of his forthcoming album “Swish”. In line (loosely) with the subject matter of this track, we revisit some touching #RealFriends moments from the pro game. Hit us up in the comments if you’d like to share your treasured on-court #RealFriends memories. Kevin McHale: Stephen Jackson: Chris Gatling:… END_OF_DOCUMENT_TOKEN_TO_BE_REPLACED Diminutive point guard Michael Adams is best remembered for his unorthodox push-like stroke that helped him average big numbers in the early 90s. During the twilight of his career, Adams spent two seasons in Charlotte playing alongside Steph Curry’s dad Dell. Judging from Steph’s passing antics yesterday, we reckon he might remember Adams not for his stroke, but his other,… END_OF_DOCUMENT_TOKEN_TO_BE_REPLACED Last night, a Jazz fan was ejected and hit with a one year ban for using a flashlight to distract Rockets guard James Harden as he shot free throws late in the third quarter The game was delayed for some time as the perpetrator was identified and evicted. We believe the fan may have been inspired by an event that… END_OF_DOCUMENT_TOKEN_TO_BE_REPLACED